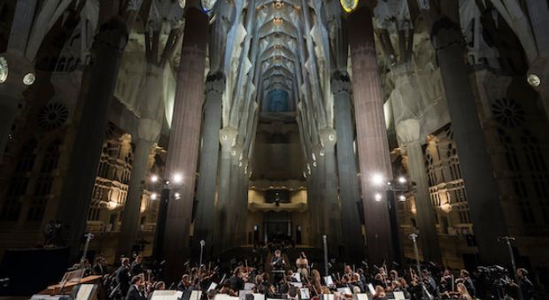 As part of its mission to raise awareness of Catalonia’s musical heritage, the Museu ‎de la Música is participating in the Manén Year to celebrate the ‎‎50th anniversary of the death of the Barcelona musician. In partnership with the Associació ‎Joan Manén, the exhibition entitled Joan Manén. Orgull i ‎destí, curated by Daniel Blanch, aims to increase our understanding of a ‎violinist and composer who was one of Catalonia’s best-known and most ‎internationally-recognised artists of the last century.‎

Manén was a self-motivated musician, a highly individualistic and intuitive artist who knew ‎from an early age that he was destined to be an important figure in the world of music. His ‎life was, in many ways, like something from a novel, shaped both by his talent and by the ‎turbulent historical events he lived through, as well as by a huge personality that can be seen ‎as representing the epitome of the 19th century virtuoso.‎

Drawing on a documentary collection that includes photographs, ‎paintings and sketches, programmes, scores, letters, instruments owned by the composer, ‎and other objects, the exhibition paints a portrait of the composer covering the ‎key aspects of his life and music. It features a screening of a documentary by ‎production company Marcial AV, “Joan Manén, Variacions sense tema” and parallel ‎activities such as concerts, conferences, workshops and listening sessions with ‎commentaries.‎

‎About Joan Manén
‎
Joan Manén i Planas was born in Barcelona on 14 March 1883. He was the elder of two sons. ‎His younger brother, Àngel, was a bassoonist with the Orquestra Pau Casals and the ‎Barcelona Municipal Orchestra. Their father, Joan Manén Avellán, was a man with a strong ‎personality. An amateur pianist, he devoted all his energy to developing the musical talent of ‎his elder son.‎

Manén began learning piano and solfège from his father at the age of four, and began to ‎study the violin when he was five. Two years later, he studied with the violinist Clemente ‎Ibarguren, a pupil of Delphine Alard. Pushed by his father, his talent blossomed. He sight-‎read works for piano, transposed Bach’s fugues, and attended concerts of the Barcelona ‎Philharmonic Society, conducted by Antoni Nicolau.‎

In the summer of 1892 he appeared in his first public concerts as pianist and violinist in ‎Castellón and Valencia, under the name of “Juanito Manén”. In 1893 he auditioned before ‎Queen Maria Cristina, who offered him her patronage. His father turned down the offer and ‎decided to travel with his son to Buenos Aires, initiating a series of extensive tours of South ‎America between 1893 and 1896. When he turned 11, Joan Manén stopped having violin ‎lessons.‎

In 1894 he conducted a 200-person orchestra and choir in La Habana, and in 1895 he debuted ‎in New York’s Carnegie Hall, an extraordinary achievement for a musician of his age. His life as ‎a child prodigy left its stamp on the personality of the young Manén, but it was not the best ‎way for him to develop as a musician. With no specific training and, once more, pushed into it ‎by his father, he turned to the challenge of composing.‎

From 1898, aged 15, Manén settled in Berlin with his father. Otto and Berta Goldsmith, a ‎couple with many connections in the Berlin cultural scene, became involved in his musical ‎education and helped boost his career. Thanks to them, at the age of 15 he debuted as a ‎soloist with the Berlin Philharmonic Orchestra, performing his Concerto ‎espagnol.‎

In Berlin he performed with the violinist Pablo Sarasate and the pianists Eugene D’Albert and ‎Teresa Carreño. Composers Max Bruch and Antonin Dvořák accompanied him on the piano at ‎private evening events, and the prestigious publisher Fritz Simrock published several of his ‎works.‎

At the age of 17, Manén gave a recital in Cologne, accompanied by Richard Strauss on piano, ‎and premiered his first symphony, Catalònia, which he conducted himself, at the ‎Líric Theatre in Barcelona. His debut, in 1904, at the Hochschule für Musik in Berlin ‎represented a turning point in his career. Following his performance of Paganini’s extremely ‎difficult Variations on “God Save the King”, he was regarded as one of Europe’s ‎leading violinists.‎

Over his 65-year career, Joan Manén gave more than 4,000 concerts and, at the start of the ‎‎20th century, he was ranked alongside the greatest violinists of the time, such as Fritz ‎Kreisler, Bronisław Huberman and Jan Kubelík.‎

In his early years, he mainly performed using a violin made by the Catalan luthier, Étienne ‎Maire Clarà. He subsequently acquired a Petrus Guarneri that had belonged to Felix ‎Mendelssohn, an instrument that accompanied him throughout much of his career.‎

Reports from the time highlight the individuality of his interpretations. The critics of the day ‎pointed to his exceptional technical mastery, the purity and warmth of his sound and the ‎captivating musicality of his playing. Manén considered himself to be a violin soloist in the ‎mould of the 19th century romantic genius personified by Niccolò Paganini. His repertoire ‎was based around works that showcased his virtuosity and cantabile skills.‎

Manén was linked to some of the greatest musicians of his time: Jenö Hubay dedicated two ‎works to him; Enric Granados and Joaquín Nin performed all of Beethoven’s complete ‎sonatas with him, and he worked with Pau Casals and his orchestra on many occasions. He ‎performed with conductors including Bruno Walter, Henry Wood, Willem Mengelberg and ‎Ernest Ansermet, accompanied by Europe’s top-ranking orchestras.‎

Born in a time when it was vital to cultivate and maintain star quality and audience ‎engagement, Manén always felt the need to be admired by audiences and feared by his ‎rivals. Aware of his talents, his pride in everything he could do was always on show, which ‎made him a difficult and complex personality.‎

Joan Manén’s career as a composer took off in 1908 after the premiere of his second opera, ‎‎Acté, at the Dresden Semperoper, one of Europe’s most important opera ‎houses at that time. The opera, which had been coldly received five years earlier at ‎Barcelona’s Gran Teatre del Liceu was unanimously acclaimed and performed in various cities ‎around Germany. From then on, Manén’s works began to feature in the programmes of ‎orchestras such as the Philharmonic Orchestras of Vienna and Berlin, Amsterdam’s ‎Concertgebouw Orchestra and the Orchestre de la Suisse Romande. Manén’s compositions ‎showed him to be an original, intuitive and eclectic musician. His post-romantic style drew on ‎Mediterranean influences based on highly inventive themes. From the age of 20 he ‎developed a more personal style, known as “Iberism”, taking the imagery of Spanish folklore ‎as the starting point for internationally acclaimed works. Demanding, and a perfectionist, he ‎often rewrote his works many times. ‎

He composed a number of caprices and concertos for violin and orchestra, a cello concerto ‎‎(written for Pau Casals and premiered by Gaspar Cassadó), concertos for piano and oboe, ‎numerous symphonic works, two ballets, seven operas, choral works, chamber music, songs, ‎works for instrumental soloists (including the Fantasia-Sonata, dedicated to the guitarist ‎Andrés Segovia), and sardanas.‎

The composer’s talent was to elevate the specific to a general level, taking legends and ‎converting them into universal themes: the development of the artist in the symphonic ‎poem Juventus, the spirit of survival in Heros, love in the quintet ‎‎Lui et elle and human behaviour in the opera Don Juan.‎

To pigeonhole a personality as complex as Manén as just a violinist and composer would be ‎to ignore the many other facets of his career. He was a conductor, pianist, writer, promoter ‎of festivals and concerts, the founder of the Barcelona Philharmonic Society (1930), the ‎discoverer of the grave of Paganini (1939) and inventor of the “Invisible orchestra”, an ‎electronic system that allowed him to simultaneously perform as soloist, composer and ‎conductor.‎

In 1954 Manén and his wife Valentina Kurz began work on creating an auditorium in ‎Barcelona that would have been named the Auditorium Joan Manén. Construction was ‎halted due to lack of funding and the violinist was unable to see one of his dreams come to ‎fruition. He planned to premiere his final work, the Don Juan trilogy of operas, ‎composed over forty years, in this auditorium.‎

Manén, who had believed himself destined for greatness from a very young age, was a true ‎megalomaniac. He achieved great success and fame, but struggled personally, seeking ‎unrealistic levels of recognition in line with his egocentricity. ‎

Towards the end of his life, Manén was a lonely figure. His great stage presence was a thing ‎of the past and the post-romantic and nationalistic aesthetic of his works no longer appealed ‎in a musical climate dominated by the record industry and new trends. He was an innovative ‎composer, with his own voice and a highly personal harmonic language, but his musical style ‎remained rooted in expression and melody.‎

In his final years, Joan Manén withdrew from the Barcelona music scene and lived in his own ‎ivory tower, surrounded by memories of a full life. He died in Barcelona on 6 June 1971, aged ‎‎88.‎